The Research Group Optimization conducts several projects for the long-term improvement of education in mathematics as a subsidiary subject. These projects are funded by tuition fees and initially restricted to a three term period. For example the following measures were taken:

Since October 2008 math-specific introductory courses for prospective students of biology and geological sciences are offered. Course duration is one week each and contents include refreshing mathematical school knowledge as well as preperation for math courses in university. Also, since September 2009, similar courses are offered for prospective students of agricultural sciences and forestry.

In 2012, a short movie presenting the introductory courses has been made:

Along with the course Mathematics for Computer Scientist mini tutorials are offered which provide - in small groups with no more than 5 students - the opportunity for students to ask questions concerning the lecture contents to ensure a better understanding of contents. Also guidance for solving homework sheets is offered by teaching assistants in order for the students to repeat subject matters.

In summer term 2012 a lecture comprising foundations from Optimization, Network Optimization and Operations Research has been offered. The lecture was intended for students of Economics and Business Informatics as well as interested students from other fields such as Bioinformatics, Forestry and Social Sciences.

Along with the course Mathematics for Biologists in summer term 2008 new lecture notes were written which include subject-specific contents and examples for mathematics in biology. In addition a set of subject-specific exercises was developed.

In March 2009 a crash course for exam preparation was initially offered for students of the lecture Mathemtics for Biologist on the accord of the Department of Biology. During the two-week course the contents of the lecture were reviewed systematically and practised in exercises. The first crash course was funded by the Department of Biology. Now it is part of the projects for the long-term improvement of Subsidiary Mathematics.

In winter term 2008 / 09 an additional lecture was offered for students of physics. In accordance with the Department of Physics the lecture Numerical Mathematics for Physicists is offered and accompanying leture notes with physical examples are created. 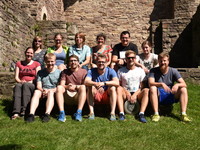